To the praise of his glory

Join us for a special message by D. A. Carson.  Once the service starts you will be able to select which CC languague to turn on or off.

Alternatively, we have prepared video links with individual language subtitles displaying automatically.  See the list below. 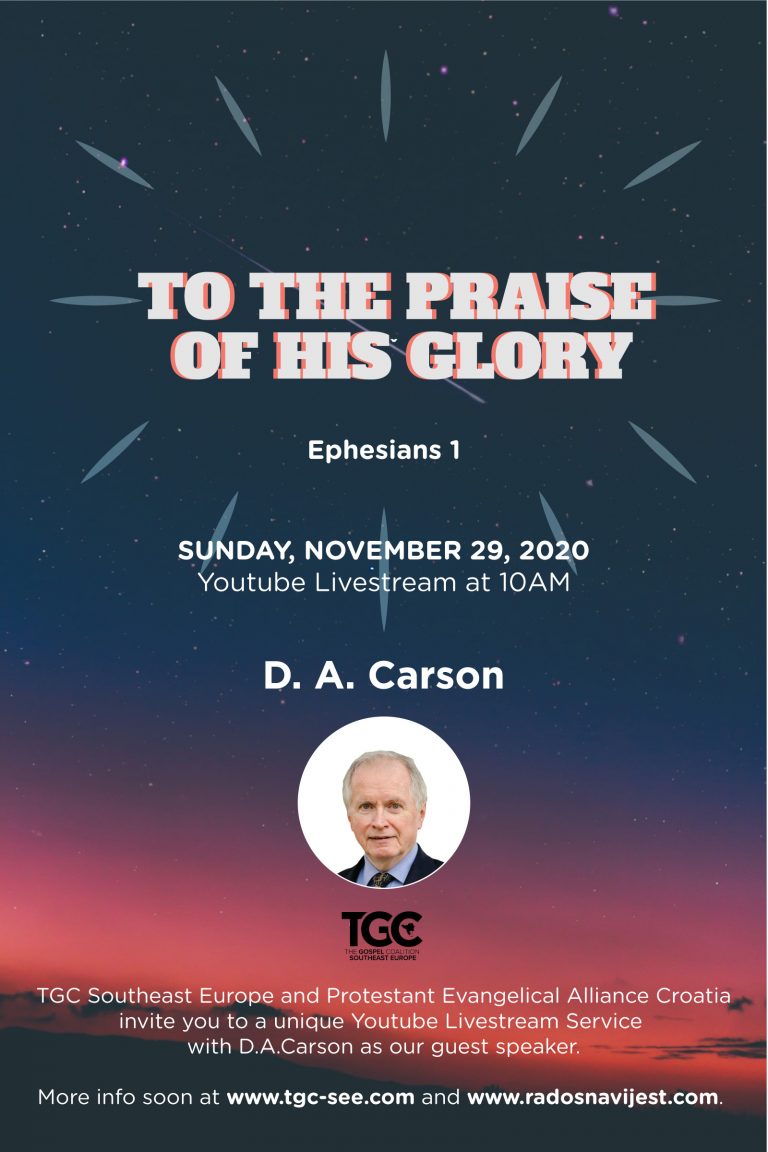 You are invited to a unique Sunday service livestream event with D.A. Carson as our special guest speaker. Organized by TGC Southeast Europe and with the support of the Croatian Protestant Evangelical Alliance (PEV), we are preparing a unique online service for Sunday, November 29 which will be streamed in churches across Croatia and the broader region of southeast Europe.
Along with excellent exposition from Ephesians by a seasoned NT Testament scholar and a beloved teacher, the service will also include a time of sung worship through songs and various brief remarks by Croatian pastors. This will be a unique opportunity to contribute to the building up of the Kingdom of God in this area of Europe. Although this will only occur virtually at this time due to social distancing, we will have the opportunity to fellowship with other believers from Croatia and other countries in the region reaching as far north as Poland, or southeast as Turkey, or southwest as Portugal. Subtitles are currently being prepared in Croatian, Macedonian, Albanian, Romanian, Turkish, Italian, and Portuguese.
If your language is not listed and if you are interested and able to provide translation, then please get in touch so we can see if it is possible to add your language.

This special service event has been prepared by churches and pastors from different denominations in Croatia and aims to encourage and point believers particularly in this area of Europe to the uniqueness and worth ​​of the Gospel of Jesus Christ our common Lord and Savior.
For those not familiar with him, D.A. Carson is perhaps one of the greatest contemporary New Testament scholars in evangelical circles today; a prolific author and editor of many books, speaker at many conferences, and, along with Tim Keller, the co-founder of The Gospel Coalition.
In light of the pandemic, the previously announced TGC SEE Conference in Osijek for November 26-28, 2020, is postponed until next year.  For this reason we warmly recommend you consider using this livestream event for your churches on Sunday, November 29, 2020.

D.A. Carson is professor Emeritus of New Testament at Trinity Evangelical Divinity School in Deerfield, Illinois. He has been at Trinity since 1978. Prior to Trinity, Carson served as academic dean and was on the faculty of Northwest Baptist Theological Seminary in Vancouver, British Columbia. Carson received the Bachelor of Science in chemistry from McGill University, the Master of Divinity from Central Baptist Seminary in Toronto, and the Doctor of Philosophy in New Testament from the University of Cambridge. He is an active guest lecturer in academic and church settings around the world. He has written or edited about sixty books. He is a founding member and past president of The Gospel Coalition.

When I heard in mid-2020 that there was a possibility of D.A. Carson coming to Croatia, I was surprised and excited about it. It is not often that a person of such theological caliber and quality visits our country, but because of COVID it was clear that even this visit will be difficult to come to pass. Unfortunately, Carson will not come to Croatia in 2020, but, God willing, he will come next year. But why should the arrival of this American New Testament theologian be important to evangelical believers in Croatia? Many have hardly heard of, listened to or read his work.

Carson is the author or editor of about 60 books, and works as an emeritus professor of the New Testament at Trinity Evangelical Divinity School. You can find more about him, his biography and some of his works through the links provided. But to learn more about Carson, it is not only important to state „how much“ he’s done, but „why“ and „what“?

To answer the question „why“ we need to look in the Bible. In Ephesians 4:11, the Bible testifies that God raises ministers in the Church for special purposes, and some of them on that list are teachers. Unlike other ministries, teachers, by their vocation, are people who spend (should spend) a great deal of time studying the word of God in order to bring biblical truths closer and explain them to those who cannot set aside so much time for it. Thus, it is a kind of symbiosis between the different limbs of the body of Christ that build on each other: they give and take from each other. Why am I mentioning this? Because Carson is an extremely gifted and qualified biblical theologian from whom much can be learned and from whom the Church can take much, only if she recognizes that quality. Reading just one of his works, produced by years of careful study and work is of incalculable value. For example, just reading Exegetical Fallacies, would help many preachers and pastors avoid frequent mistakes in reading and interpreting the Bible and in turn raise the level of their biblical literacy and the quality of preaching and teaching.

This brings us to address the „what“question. Carson is an evangelical conservative biblical theologian – and that is commendable in every sense of the word. Being a theologian means engaging in various theological fields, and Carson is renowned for his New Testament scholarship. But much more important than the field of his study, Carson is a theologian who takes the Bible as the authoritative basis for his work and life. Being a theologian does not automatically mean that someone bases their theology on Scripture. And so Carson belongs to a group of conservative theologians who seek to subordinate themselves to the Scripture, not to subordinate Scripture to themselves or to the „spirit of the times.“ And finally, Carson is one of the evangelical theologians which means he is part of a group of theologians who don’t all think alike on matters of theology. In that regard, someone might disagree with his views on spiritual gifts or with his understanding of the roles of men and women, but still agree on the essentials of the Gospel and gain significantly from his teaching.

If the Lord wills, we will have the opportunity to welcome D.A. Carson to Croatia next year in person. For now, let’s not miss the opportunity to join with brothers and sisters across southeast Europe and tune in to the November 29th livestream service.

dr.sc. Ervin Budiselić, lecturer at the Bible Institute in Zagreb 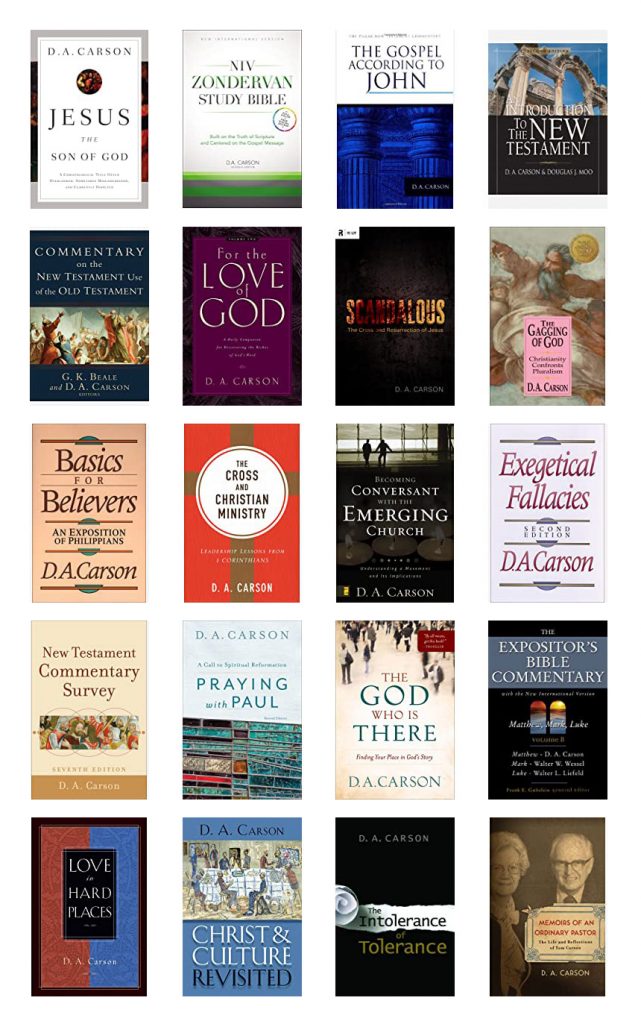 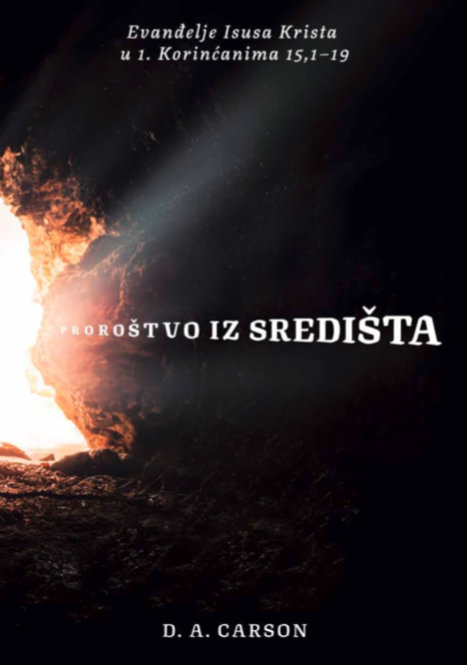